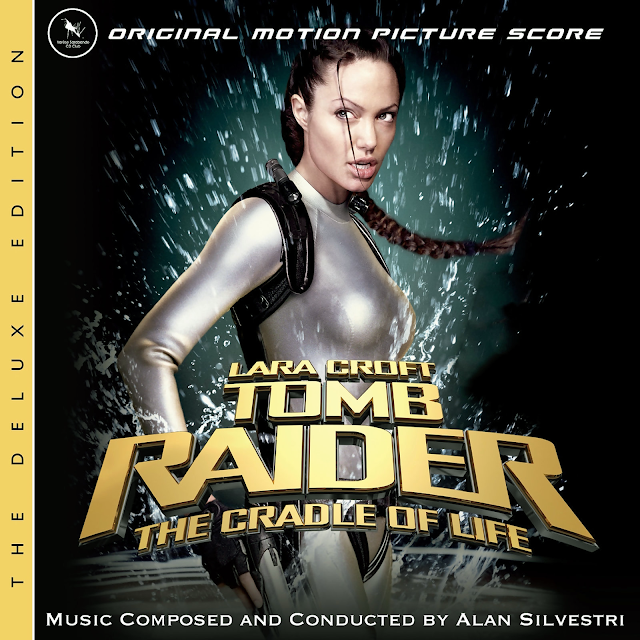 Varese Sarabande provides Tomb Raider and film score fans with an unexpected expanded catalogue release of Alan Silvestri's original score to Lara Croft: Tomb Raider - The Cradle of Life. Nearly 20 years later, the 2003 film and its 2001 predecessor starring Angelina Jolie do have quite the cult following. Four respective soundtrack albums were previously released, two alongside each film, being both original scores and various artist feature compilations.

The "Deluxe Edition" album includes approximately thirty minutes of unreleased music, more-or-less constituting an unprecedented complete score release for the franchise's second film entry. This album is immediately available across all streaming and digital music platforms, which is unusual for such a niche project, as well as a limited edition physical 2-CD run consisting of 2000 copies only. The latter collectible is out on October 28th, 2022, available to pre-order at Varese Sarabande today.

MoTR of course has secured a copy for archiving and the album is published in our Commercial Discography. Full tracklist supplied after the jump below - we've taken the liberty of highlighting the previously unreleased material. Notably, Craig Armstrong's "Lab Scene" has been included as track 14 "She Escaped - Break In". This may or may not be as previously suspected an ultimately unused, Silvestri-embellished version of the piece, regardless, Armstrong goes conspicuously uncredited.

Both Lara Croft: Tomb Raider (2001) & Cradle of Life (2003) are notorious for having hired composers at very late stages of production. Silvestri, according to the DVD featurettes, famously borrowed and varied Nathan McCree's original Tomb Raider video game motif for the second film. Following expansion of the hour-long album of 2003, new liner notes from Silvestri himself are included in the 2022 Deluxe Edition - issued to those first lucky two-thousand owners.