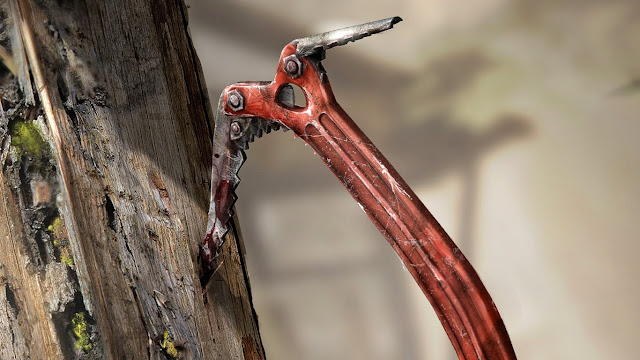 Members of the Tomb Raider community have been wondering why the music heard in the Game Informer podcast (of December 2010) made no appearance in the "Turning Point" trailer for Tomb Raider (2013). It appears Crystal Dynamics has replaced the composer of this piece. The following article serves as a recapitulation of events.
On the 22nd of December, 2010, during the exclusive Game Informer coverage on Tomb Raider, a special edition podcast made the first appearance of "a track from the game itself". The music begins with a subtle introduction of piano followed by guitar layers, purporting darker undertones. This literally and symbolically creates a distinct feel for Tomb Raider; made explicitly separate to the rest of the music of the Tomb Raider franchise which the guitar as an instrument is particularly foreign to. With similarities to Tomb Raider: The Angel of Darkness, fully orchestrated strings follow, which are then accompanied by percussion. The instruments develop into a motif not unlike an inverted minor derivation of the classic Tomb Raider motif composed by Nathan McCree, providing an unsettling familiarity for some.

"Before we get ahead of ourselves here, Alex Dimitrijevic is scoring the trailer. We officially haven't announced the composer for the game" - Karl Stewart


This was contrary to the popular belief that Crystal Dynamics may have again acquired a trailer composer à la Troels Brun Folmann (Tomb Raider: Legend) to complete their next AAA title. Months passed and Dimitrijevic's piece was viewed over 50,000 times on YouTube - anticipation for new franchise music was high. However, on the eve of the Turning Point trailer, the composer again enlightened Tomb Raider Forums members to the situation; the news was:

"I'm sorry to say but, from what I know at the moment, looks like none of the music I did for the game or the trailer will be used in Tomb Raider or the upcoming Tomb Raider Trailer." - Dimitrijevic

"So I know we've worked with some early concept work with a a great guy called Alex Dimitrijevic. Unfortunately this ["Turning Point" trailer] piece is not a piece that he's worked on - he was phenomenal and helpful to us in our early stage stuff. This is a complete new composer and somebody who we've brought in to work on the game as well as this [trailer] piece to make sure everything we do is consistent. So I look forward to the end of the year to be able to help sort of shed some light on that and tell you who he is. I'm stoked and delighted as the rest of the team are to have this person on..." - Karl Stewart

Crystal Dynamics is slated to announce the game's final composer (the unnamed talent who composed both the music heard in the "Turning Point" trailer and the score to the upcoming game) later in the year, likely alongside the voice actress for Croft. For now they are keeping quiet, but an excerpt from the new trailer score we did hear, released as a "ringtone", is available via Tomb Raider's official website.

As all of Dimitrijevic's material for the game is fast looking to become Tomb Raider music rarities, the snippet should be treasured. Crystal Dynamics does own the material, on the other hand; it may still make an appearance in the final game.