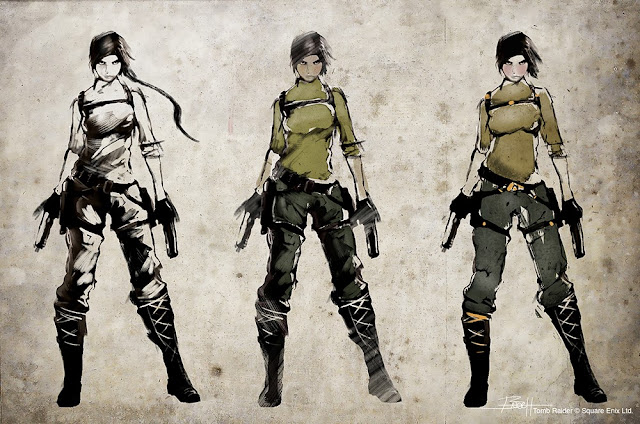 As well as an interactive "Instrument" by Jason Graves, the app features several embedded videos showcasing beta and "vertical-slice" game-play footage of both Tomb Raider and its unreleased predecessor, Ascension. The music to the vertical-slice segments was released by Graves in July, 2013:

However, the explicit Tomb Raider: Ascension footage of a horse-riding Lara escaping horrific monsters (viewable within the app) was accompanied by additional music. While suspected to be original score, the piece is actually "Glasgow Mega Snake" by Scottish post-rock band, Mogwai. The track is available on their 2006 album, Mr. Beast (iTunes | Amazon).

In 2010, shortly after the announcement of the development of the Tomb Raider reboot, musical talent was acknowledged by Crystal Dynamics as attached to the then unknown conceptual Ascension - trailer score composer Aleksandar Dimitrijevic:

"...we've worked with some early concept work with a great guy called Alex Dimitrijevic... he was phenomenal and helpful to us in our early stage stuff" - Karl Stewart, Global Brand Director @ Crystal Dynamics

Following the release of the Final Hours app, the piece heard on Game Informer in December 2010 has since been attributed to Ascension's unreleased bank of conceptual material, destined to remain Tomb Raider musical rarities. Various artworks by Brenoch Adams (pictured) have also since been released, and are available within the Final Hours purchase.


Update: Dimitrijevic has again explained his involvement with the project:

"As for CD and my TR involvement, although I can't go in to details due to legal agreements, I was never dropped. I was hired around end of 2009 to work with the TR team on a pre production music score for TR. I completed the job, CD team was very happy with the work I did, I got payed and that's that. Afterwards I was hired to do the first trailer like you all know, I scored it, again CD was very happy with the job I did, I got payed and that's that. In the end CD decided not to use my score in the trailer, and use the trailer as first platform to introduce Jason's TR work to world. And, that's that." - Aleksandar Dimitrijevic

The talented composer offers more of his work via SoundCloud & many of his trailer scores are available on iTunes. Feel free to like his Facebook page. Listen to another piece by Dimitrijevic from August below! The "Untitled Medley" is popularly rumoured to be connected with Tomb Raider: Ascension: