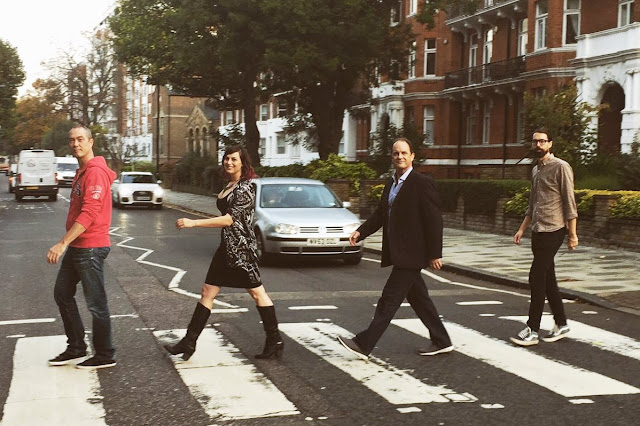 Nathan McCree, Meagan Marie & co. making the Abbey Road Zebra Crossing
The music of Tomb Raider has filled London's famous Abbey Road Studios for the first time in 15 years. Interestingly, the first instance was Peter Connelly's score to the sixth franchise entry Tomb Raider: The Angel of Darkness in 2002. This gig constitutes, for the first time, the recording of Nathan McCree's The Tomb Raider Suite - a Kickstarter-funded project of reworked material from Tomb Raider I, II & III (1996-1998) as originally envisioned by a full orchestra and not limited by the software of the times.

McCree's work is being performed by the Royal Philharmonic Orchestra as conducted by Robert Ziegler with orchestration by Adam Langston. While mixing, mastering and manufacturing are now in the pipeline, the release date of the recording as slated for November 2017 could be delayed. The Tomb Raider Suite album will mark the first commercially available version of the material in the history of the franchise, with the software-symphonic soundtracks to the original Tomb Raider games remaining officially unreleased.

Preview of today’s recording session at @abbeyroad. We can’t wait for you to hear the #TombRaiderSuite in full! pic.twitter.com/0fEZDTeLkS

Update: McCree has sent out an afterword on the production:


"It’s been one week since we finished the recording session at Abbey Road Studios.

And what can I say? What a fantastic 2 days. Probably the best 2 days of my life!

The Royal Philharmonic Orchestra, under the steady hand of Robert Ziegler, performed to perfection. Their attention to detail was second to none.

The expression, the phrasing and the emotion – it was all there.

The fans who attended were testament to that – the amount of tissues that were consumed – there wasn’t a dry eye in the place!

So I would like to take this opportunity to thank all those involved:

Adam Langston for his exquisite orchestrations;

Sam Okell for his mastery of the pots and pans and clear thinking;

The Royal Philharmonic Orchestra and the Metro Voices for their incredible musicianship;

And to all the people at Abbey Road Studios who made our stay extremely enjoyable and stress free.

Finally I would like to thank all of you for supporting this project. I truly believe we have captured an exceptional performance of The Tomb Raider Suite, something which you can feel very proud of for the rest of your lives.

Our next step is to get the album mixed and mastered before we can move on to mass production."