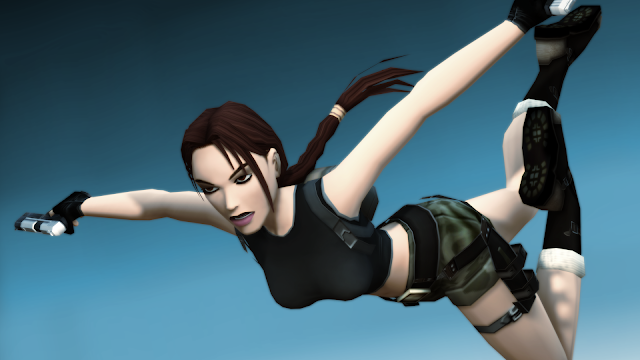 Academy-award-winning Danny Elfman has been writing music for almost 40 years. His works include the renowned television theme to The Simpsons and the soundtrack to Wanted (2008), starring our very own Angelina Jolie. Elfman's discography also houses 25 years of scoring classic Tim Burton films, such as Edward Scissorhands (1990), Batman Returns (1992) & The Nightmare Before Christmas (1993).

Phenomenal film (and recently video game) composer Hans Zimmer is known for reusing his motif's across works. The Inception (2010) score writer is responsible for a particularly notable tune that stems from the motion picture Drop Zone (1994), with variations through to Gladiator (2000) & more recently the Pirates of the Caribbean quadrilogy (2003-11).

Three of these prodigies' pieces were concatenated for a promotional trailer showcasing Tomb Raider: The Angel of Darkness (2003):


The first is the introduction from "Ape Suite #1", present on Elfman's Planet of the Apes: Original Motion Picture Soundtrack (2001) - another Burton collaboration:

The pace is then quickened with an excerpt from Zimmer's "Too Many Notes/Not Enough Rest", borrowed from 1994's Drop Zone: Original Motion Picture Soundtrack, before finishing with "After The Dub" from the same album.

Sample(s) currently unavailable
Each of these pieces are readily available worldwide on the iTunes Music Store. The Angel of Darkness trailer in mention is available on the Tomb Raider: Anniversary [Collector's Edition] Bonus DVD.

Thanks to MariaCroft @ YouTube for their involvement in this investigation!