Following months upon months of delays to promised goods, ex-Production Manager on The Tomb Raider Suite, Tracie-Anne Swift, has published an open forum post alleging that the project has run out of money. She requests all affected backers (who have not received their pledges since the project was funded in 2017) contact her to establish the magnitude of any wrongdoing.

"The Tomb Raider Suite has no money left, it really is as simple as that. And it hasn’t had any funds for a very, very long time." - Tracie-Anne Swift

The Tomb Raider Suite Kickstarter has been updating its backers regularly over the past 2 years, detailing production delays throughout this time. Last we heard from composer Nathan McCree, all jewel CD cases had been shipped to backers. Those pledges promised deluxe tin CDs, vinyl albums and more, are still affected by manufacturing delays. The allegations subsequently leave those in waiting concerned. 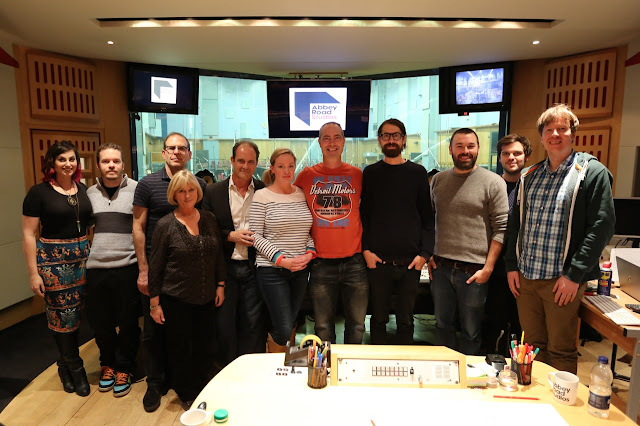 The Tomb Raider Suite team including Swift, McCree & Meagan Marie
As well as lack of pledge fulfillment for some supporters, Swift alleges that for high-tier backers the San Francisco buffet event is compromised as deposit(s) made have been absorbed into the project's mismanagement and financial delays. Complaints of inappropriate conduct have also been made.

The Tomb Raider Suite exceeded its fundraising goal of £180,000 in 2016, backed by 2,615 fans. The project consists of the 2016 premiere Tomb Raider - Live In Concert, the digital album released in late 2018, a yet-to-be-released documentary film entitled Tomb Raider: Remastered as well as a promised world tour of the live show slated to kick-off in Australia.

Update, 21st June 2019: Nathan McCree has made an official response through an update on the Kickstarter platform (full post after the jump below). The allegations still stand in the original open forum.

We are aware that some unfounded allegations have been made against the Tomb Raider Suite. Please note these are not correct or accurate. If clarification is needed please see our latest Kickstarter update or contact Nathan directly. Thank you.

When we started the Kickstarter campaign, our policy was to not only record The Tomb Raider Suite to the highest standard possible, but to ensure that the quality of merchandise and all that we offered our backers exceeded expectations.

As a result, additional musicians were brought in, an additional 3-hour session at Abbey Road was booked, all the events were filmed to have material for a documentary; and no expense was spared to ensure the Hatfield House event was an unmitigated success.

And where additional monies were required to ensure the highest quality was maintained throughout, we used both our own personal investment and the ingenuity of the people working on the project. As a result, we were able, and continue to be able, to deliver our pledge to you.

There have been considerable regrettable delays in forwarding your merchandise but this has never been because we ran out of money. Usually the delays have been caused by compliance processes which we did not know or simply because we didn’t have the manpower to move them forward any faster. The important thing to mention here is that at no point was there going to be a problem fulfilling your pledges, and as mentioned in my last update we have placed the orders on our last remaining products and are now waiting for delivery of those.

We promised you all these rewards and you will all receive them.

As for problems with postage, of the nearly 3000 packages we have sent out we have had about 30 lost, stolen or damaged. We have honoured every single item that has been reported to us damaged or missing with a new replacement. We asked if the damaged items could be returned to us, but never demanded that as a requirement to receive the replacement. The fact that only 1% of the postage was problematic is more a testimony to the excellent quality of the Royal Mail than a criticism of us. If anyone has a damaged item or has not received a reward which they should have done, then please contact me directly on the Kickstarter website, as detailed in my last update, and we will do our best to resolve that for you as quickly as we can.

Finally, we have every intention of mounting the composer buffet at the Legion of Honor in San Francisco and have reconfirmed that with them only yesterday. We will be looking at possible dates in a few months and will let everyone know when tickets will be made available.

This entire situation has been a personal attack on me and the so-called problems with the handling of the Kickstarter project has been a pretext.

Tracie-Anne was a volunteer who was invaluable in helping us with both the Kickstarter campaign and the Hatfield House Composer Buffet Reception. But, as sometimes happens unfortunately in these situations, for personal reasons we fell out.

As the saying goes, “if you never heal from what hurt you, you’ll bleed on people who didn’t cut you.” I can only apologise to you, our backers, that this situation was not resolved privately.

I should stress that Tracie-Anne has not been part of this project for over a year and has no idea of the current operation of The Tomb Raider Suite. As of this update we have decided to refund Tracie-Anne, not because we want to silence her, but because she was a backer, not a supporter. [See Update 73 – “ALL GOOD THINGS IN LIFE... (Part 2)”]. If you want to read her comment it remains in the main comments section.

As consistent with my previous updates, we are spending the minimum possible time engaging with negative, subversive actions, comments and ‘contributions’ to this campaign. This will be my only update in response to this matter.

Since Tracie-Anne left the project we have completed the pledges for the Digital Download, the first T-shirt run, the Jewel Case CDs, the Acrylic Logos and all paper products. We currently have the Deluxe Tin CDs and Vinyl Records on order. Our focus is now on the San Francisco Composer Buffet Reception and completing the remaining T-shirt orders. The Tomb Raider Suite is in the best possible place since we started the project and I am very proud of what we have delivered so far.

Our focus remains and has always been on fulfilling our commitments to you and that continues unabated despite any claims or accusations to the contrary.