Tomb Raider soundtrack "will be released at launch" says Karl Stewart, composer to be named soon 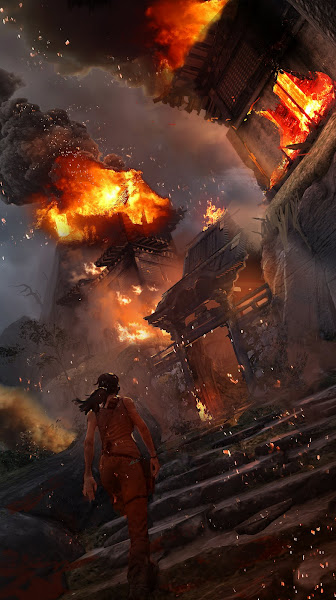 "Mountain Climb"
During our participated E3 coverage, input from MoTR was included in an exclusive community based interview with Karl Stewart, Crystal Dynamics' Global Brand Director. The Irishman let loose on some juicy information about the music to Tomb Raider (2013), of which the biggest news was the reaffirmation that an official soundtrack is in the works:

Q: Tomb Raider has always had great music that was really immersive. Can you tell us who the composer is?

"You're right, Tomb Raider has always had awesome soundtracks. We've been very keen to make sure that for this game we have an awesome soundtrack, and we are creating a soundtrack right now that will be released at launch. You've seen most of my tweets, I love soundtracks. I listen to soundtracks 99.9 percent of the day, I don't listen to words in songs, and I've got every movie that I can think of that I love... So we're very passionate about soundtracks. With that, we made sure we've chosen the right team of people, including a composer, to be able to bring together this soundtrack. Again, we are getting very close to announcing this person..." -Karl Stewart

Thus the unannounced composer continues their existence under embargo. Consequent of extensive MoTR research, the BAFTA-winning Jason Graves remains the most conspicuous. Stewart also intimates that the composer is scheduled to be revealed sometime during the media campaign throughout the remainder of the year, most likely after the voice actress for Croft.

This marks the first anticipated commercial Tomb Raider soundtrack release in over 15 years of the video game franchise. To date only the films starring Angelina Jolie as Lara Croft have ever seen bodies of marketable music.

Read the entire transcript excerpt after the jump:


"...What I'm trying to do, so you're aware for all your sites... As you know, most campaigns, all of a sudden out of nowhere you hear, oh, this person's the voice, or this person's making the music, this person's written the script, and there's no real...understanding of how the process happened or why it happened or how we chose that person. So what we're doing over the course of the campaign, starting in about, let's see... I don't want to put an exact date on it because it may change, but let's just say in the next month, we're going to announce who the voice of Lara is. And then from that, every eight weeks we're going to announce a major part of the game. So for instance we're going to announce who the script writer is, we're going to announce who the composer is, we're going to do that all the way through the campaign, so that we make a big deal about these pieces of information. We give it the prestige that it deserves. It's a very big franchise, and if you were to watch the making of a movie, you know that when a director comes on board or an actor comes on board, it's a big deal.
It's not about just the fact that we make the game and the studio, once again there's some phenomenal talent... What we're trying to do is present that in a way that allows us to show that it's not just that person or that talent, it's about a process that they've gone through to get to where we are today, and it's about bringing that to life in a very definable approach that you feel like... It allows you to see a part of the game and a part of development that you never imagined happened.

What we're doing with Tomb Raider, we're doing some very exciting, very unique and different things that we've never done at Crystal, let alone on a Tomb Raider game. We want to make sure that when we announce these types of things, whether it be the composer or the script writer, we do it in a way where... When you watch this or you read this you'll feel like that is something special, very special. We have some things that we've proposed that are very exciting. It's not just about, hey, here's the person. The composer has gone through extraordinary lengths to get the types of noises that you hear in the game, and then made music from them. I'm looking forward to watching them bring that to life. Expect it...We're going to do this probably over five different episodes, we're going to make the announcement on what that all means and how it's going to come to life in a few weeks. But in the next month, I'm very excited to be able to get our girl and bring her out there and show her off to the world, do some interviews with you all and chat about it. It's very exciting." - KS

Q: Building on the question about the composer, and the influences for this game, was there any inspiration from previous Tomb Raider titles?

"With a re-imagining, we always say the same thing, don't throw the baby out with the bathwater. And I've used that many times, actually I get people saying, explain that! [laughter] It sounds very extreme. But one of the key things with every aspect of Tomb Raider is we can't forget who we are. In making all these changes, we don't want to forget that we have an identity, we have a formula. Something that's unique. And in everything that we do, whether it be casting for a new Lara, getting the voice right, down to composing and trying to find the right music, we still looked back at what made Tomb Raider Tomb Raider. There were certain things that will become iconic in this and you'll remember... We'll have sort of throwbacks or an element where you'll think, I remember that, even small snippets. But what I will say is that this one is very fresh and very new. And it's more about the game that you're playing, about the world that we're building. And also about setting a foundation for the future of the franchise. We want something to become iconic that belongs to this game. We also want it to be familiar, yet different." - KS

"It is a very tall order. And I think, you know, again, getting back to...Looking at, for instance, the music of Batman, I listen to the music scores constantly, listen to film scores constantly. And I look at the Batman score, it's probably one of my favorites, because they made it iconic, they've made it their own, and some of the music that was in that has crossed over into many other movies and many other scores. Because it became so powerful, had such an identity for that movie, that people now look at that and go, that's Batman. When you hear the trombones going BRRRM, BRRRM, you think, I've heard that before. Of course it gets overused in some cases. But for us we want to make sure that it's familiar, yet different. You'll still listen to it and say, I know certain things... And that isn't in a literal sense, where you'll here the chime when she picks something up or when she puts it in her backpack, those are all the small little things that you have to push aside and look at what becomes iconic." -KS