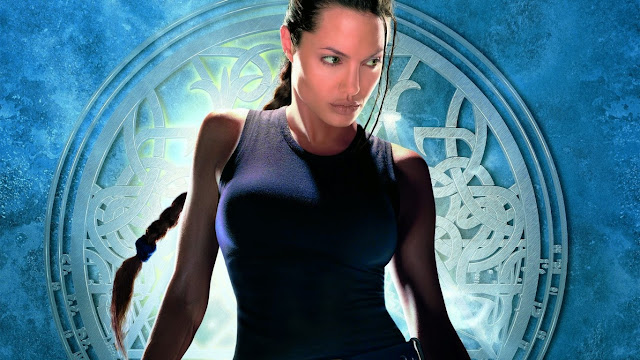 Angelina Jolie stars as Lara Croft in the franchise's first film
Much to the confusion of Tomb Raider and film music fans alike, the printed track-listing for the Lara Croft: Tomb Raider 2001 film adaptation's original motion picture score CD album was seemingly incorrect. Fans complained that not all of the names of the pieces matched up with the material presented. Amendment did take place, with Kiwi composer Graeme Revell commenting on the matter himself:

"Unfortunately the album suffered greatly because we had to send it to mastering while still mixing the movie track. There were mistakes made in bouncing up to 32 tracks digitally in the computer. Some things completely disappeared and then the sequencing was messed up at the mastering studio. My apologies to those who care about such things. The correct sequencing will be posted on my website." - Graeme Revell

The corrected track-list is as follows:

In summary, there's only one new track name: Deep In The Temple - and while no title has been lost (the previously confusing Lara Croft at Home has been merged with the track name of the ultimately unused Main Titles), most have been moved back a place. Revell's score is still available via Amazon.