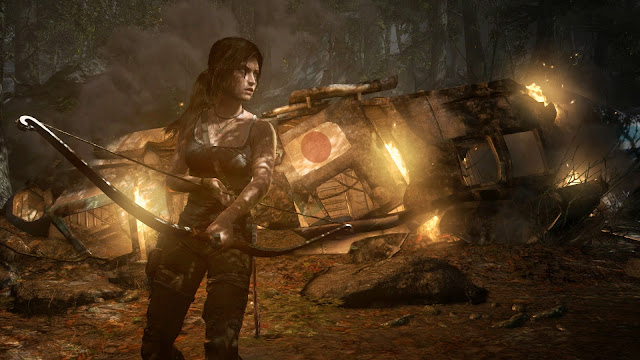 It may not be news that a globe-trotting sequel to 2013's Tomb Raider is in the works, but E3 2014 is just around the corner and developer Crystal Dynamics is set to announce new game(s). Both new-continuity composer Jason Graves and long time in-house sound designer (music supervisor on Tomb Raider) Alex Wilmer have recently hinted on Twitter about working on what is hopefully an upcoming trailer:

Just finished work at 1:30am on an incredible surprise for E3. Hope you love it like we do!

While his score to Tomb Raider (2013) saw critical acclaim and marked the first commercially available soundtrack publication in the history of the Tomb Raider videogame franchise, Jason Graves is yet to be publicly attached to a sequel. The BAFTA-winner (Dead Space) created a new thematic motif for the pop-culturally iconic Lara Croft; the composer is expected to return for the continuation of the franchise's reboot as the series' fourth musical mainstay.

Update: It appears Graves is actually referring to "Final mixes/cut downs for multiple pieces on a trailer album". Thus the above scenario seems less likely. Regardless, we'll find out soon enough if Wilmer's "surprise" is Tomb Raider 2 related (i.e. the 10th iteration of the TR video game franchise) or regarding an entirely new intellectual property at E3 2014, from June 9th. Interestingly, Square Enix have just registered the currently blank domains "Rise of the Tomb Raider" & "Lara Croft and the Temple of Osiris".
Topics: Alex Wilmer, Jason Graves, Rise of the Tomb Raider
Email ThisBlogThis!Share to TwitterShare to FacebookShare to Pinterest