Crystal Dynamics announces Rise of the Tomb Raider
& Lara Croft and the Temple of Osiris at E3 2014
- awaiting word from Jason Graves: no comment at this time 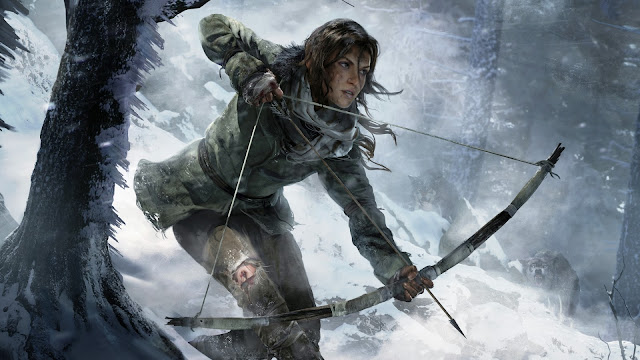 Rise of the Tomb Raider conceptual artwork
Redwood City studio Crystal Dynamics today announced not one but two upcoming Tomb Raider franchise entries with trailers at the 2014 Electronic Entertainment Expo (June 9-13). Rise of the Tomb Raider as the 10th pillar instalment of the series is slated for a 2015 release and is to continue a new Lara Croft continuity from 2013's Tomb Raider. While Lara Croft and the Temple of Osiris will rebirth classic tomb raiding experiences with multiplayer as the sequel to 2010's Lara Croft and the Guardian of Light.

We have reached out to Tomb Raider (2013) composer Jason Graves for confirmation of his involvement with either or both of Rise and/or Osiris. While MoTR has received a response, the talented BAFTA-winner has no comment to make at this time. Graves received critical acclaim for his work on Tomb Raider and released the first commercially available soundtrack publication in the history of the video game franchise. The composer is expected to return for the continuation of the franchise's reboot as the series' fourth musical mainstay. A short piece of music appears in the announcement trailer for Rise (after the jump) below, but this is a piece by James Horner and not new material from an attached composer.


Rise of the Tomb Raider E3 2014 announcement trailer
While Guardian of Light's music was entirely recycled from previous Tomb Raider games, it appears new music has been contributed to Osiris from the trailer below. It is uncertain if Jason Graves will be composing music for the arcade game as well, or if the new piece is by someone such as Alex Wilmer on the in-house team. Again, the possibility of the trailer using ready licensed trailer music is not ruled out.

Rise of the Tomb Raider


Crystal Dynamics, a Square Enix studio, today announced its latest title in the critically acclaimed and award-winning Tomb Raider® series, Rise of the Tomb Raider ® . The game will redefine survival action in Holiday 2015.

In her first adventure, Lara Croft® was forged into a true survivor, but she glimpsed a deeper, secret world. In the next chapter of her journey, Lara must use her survival skills and wits, learn to trust new friends, and ultimately accept her destiny as the Tomb Raider.

“With the power of the new generation, and our proprietary Foundation engine, our high octane action moments will be even more epic. Multiple locations around the world will be filled with exploration spaces that are some of the most beautifully hostile places on earth and over three times larger than we could achieve before,” said Darrell Gallagher, Head of Product Development and Western Studios at Square Enix. “Our digital actors will rival CG quality, and after hearing the cry from our fans loud and clear, we will put the tombs back into Tomb Raider, all in our gritty Survival-Action style.”

Rise of the Tomb Raider builds upon the formula that made Tomb Raider a success, and features the return of Camilla Luddington as Lara Croft. Camilla will take character performance to new heights as Lara pushes herself beyond human limits and is confronted with what it means to become a hero. Once again, Crystal Dynamics is proud to have the award-winning author Rhianna Pratchett as a key member of the writing team, helping craft a story that delves into Lara’s inner turmoil and motivations in this critical second act of her journey.

Lara Croft and the Temple of Osiris


Crystal Dynamics, a Square Enix studio, today announced its latest title in the Lara Croft series, Lara Croft® and the Temple of Osiris™. The game will launch on the Xbox One, the all-in-one games and entertainment system from Microsoft, the PlayStation®4 computer entertainment system, and Windows® PC.

Lara Croft and the Temple of Osiris is the sequel to the critically-acclaimed Lara Croft and the Guardian of Light, and the first-ever four-player co-op experience with Lara Croft. Featuring stunning visuals and a brand-new story, players must work together to explore the temple, defeat hordes of enemies from the Egyptian underworld, solve devious puzzles, and avoid deadly traps. All the while, players will compete for treasure, powerful artifacts, and ultimate bragging rights.

“After the immensely positive reception we received for our debut co-op adventure Lara Croft and the Guardian of Light, we always hoped that we would find the time for Lara to return in another classic AAA digital arcade title,” said Darrell Gallagher, Head of Product Development and Western Studios. “We are excited to expand upon Guardian of Light’s legacy with an entirely new adventure, and challenged ourselves to create fun new ways to play. Four-player co-op in Lara’s world combined with Crystal Dynamics’ high production values are being brought to a new generation of platforms and we are excited for more friends to share in the adventure together.”

Lara Croft and the Temple of Osiris takes place deep in the deserts of Egypt. In her new adventure, Lara must join forces with rival treasure hunter Carter Bell and imprisoned gods Horus and Isis, to defeat the evil god Set. As Lara and her companions fight the elements of nature across the sands and through ancient tombs, they will battle legendary deities and creatures of myth. With the fate of the world at stake, Lara must recover the fragments of Osiris to stop Set from enslaving all mankind.

Topics: Jason Graves, Lara Croft and the Temple of Osiris, Rise of the Tomb Raider
Email ThisBlogThis!Share to TwitterShare to FacebookShare to Pinterest