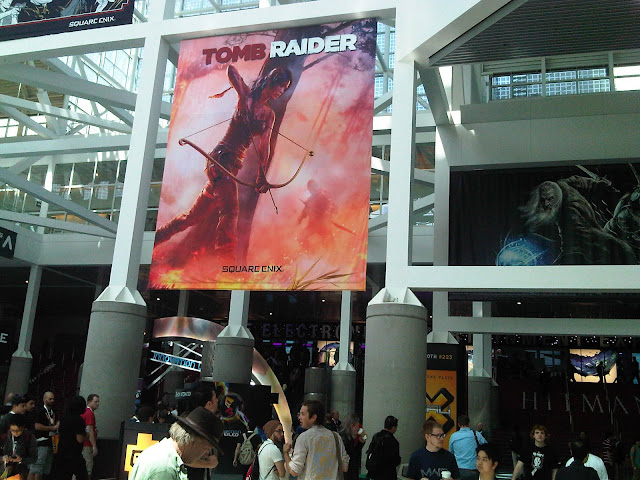 Eventually we got whiff of our exclusive interview with Karl Stewart at E3 2012, via our community ambassador from fellow official Tomb Raider fansite Guns & Grapple. While not all of our questions were asked due to time constraints, the Tomb Raider Global Brand Director offers a little more insight to inquires where he could, piggybacking from the full community sit-down.

Stewart intimates that like the presence of the Crystal Habit podcast on iTunes, he's confident the soundtrack release to Tomb Raider should make an appearance on the popular digital music distributor. The Irishman also expresses interest in making music from the previous entries of the franchise commercially available, to date no Tomb Raider video game music album is.

We'd like to thank our representative for completing the trip to L.A. despite several bumps along the road! The transcript excerpt follows:

Q: Will there be additional bonus material in the Collector’s or Limited Edition sets?

"Yeah... actually, we’re right in the middle of deciding that as we speak, there’s a lot of content that gets created in making a game and there’s a lot of stuff that ends up on the cutting room floor, you know, much like movies ...a movie starts at four hours and ends up at ninety minutes.

...for us, there’s a lot of stuff we want to talk about. We’ve been a little more strategic in the way in which we go about doing it now, so that when we do performance capture we capture all our B-rolls to make sure that we’ve got it all and then instead of just launching it all... in one big lump in a collector’s edition. This is where we’re going to be doing these chapters as you’ll see over the next coming months ...to bring some of that to life and in a very unique way. So it’s very important that we show people some of the procedure that we go through, the process that we go through. So yeah, you’ll see a lot of additional content." - Karl Stewart

Q: Regarding the soundtrack release, will any of the music either from this title or from previous titles make it's way to iTunes?

"I need to have a look at that right now ...obviously, you know, iTunes has now become the defacto place to go and get most all your music in a lot of cases. I know Meagan’s worked hard to make sure that we do things like getting podcasts up there. I know certainly from our experience of our soundtrack when we do release the soundtrack we’ll make sure that it’s on iTunes because it’s the defacto. So, you know – it’s interesting. I might have a look if they’re not up there already, I would like to make that happen actually, it would be great to get all the previous soundtracks – or whatever soundtracks are out there, up on iTunes." - KS

Q: You said the soundtrack will be released in line with the game – regarding the game’s release, is that going to be a worldwide release date or is it going to be staggered?

"Right now it’s a world-wide release date, we’ve been talking with our European counterparts and we’ve made the decision that March 5th will be the date that we launch the game in our EFIGS territories [English, French, Italian, German, Spanish] and North America. We haven’t made a final decision yet with regards to our Asia markets and our Japanese markets, that will be a little harder because they’re a little more complex, to make sure that, you know, translations and VO and making sure it hits at the right time.

So certainly from North America, South America, right through to all of Europe our goal is for it to be day and date, which is a big thing, because obviously normally it’s Tuesday at one place and Friday at the other – we wanted it to be March 5th as a global release date." - KS