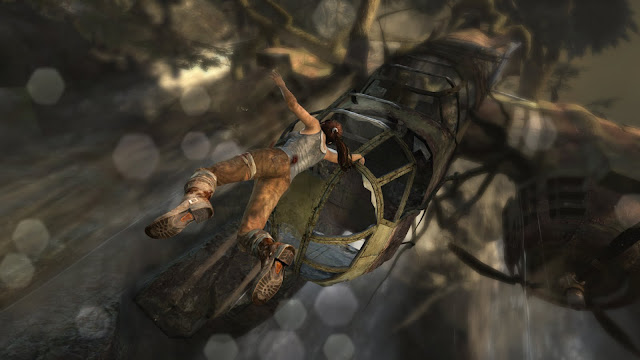 GameSpot was last to stage a demo of the game, but pulled off by far the longest play. The media outlet has released three pieces of footage, devoid of any commentary or the noise of the crowds. It is these videos that showcase the capability of the music to provide atmosphere to the environment, dynamically accompany tense game-play and most significantly apply emotional importance to key scenes where Lara must make troubling decisions in order to survive.

Warning: significant plot elements, characters and dialogue are revealed in the following footage, which leads on directly from E3 2011's demonstration.
Spoil at your own risk!

Croft is forced to take the life of a wild animal in the next clip. The moment is scored in a thematic melancholy sweep, most emotionally, as she undergoes something she has never had to do before in order to survive. Minimalist ambience accompanies the area, with sibling percussion to clip 1 returning:

Lastly, Lara explores an underground meat shed supposedly built by the mysterious castaways whom she previously encountered. A peculiar vocal-driven ambient track fleshes out the oriental vibes of the island, providing an unsettling yet exploratory tone to the potentially dangerous situation:

Furthermore, cinematics presented appear to be individually scored. The composer remains unannounced but is expected to be revealed some time after the voice actress for Croft, the latter likely to be next month. The rumour is that Dead Space's Jason Graves holds the position.
Topics: Jason Graves, Tomb Raider (2013)
Email ThisBlogThis!Share to TwitterShare to FacebookShare to Pinterest