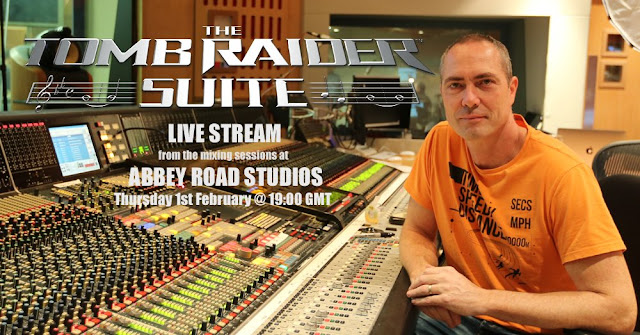 The first part is from The Front Room mixing suite, where McCree and Paul Pritchard talk about the technical insights into the mixing process, featuring exclusive previews of some of the mixes from the album. The crew then take viewers on a live tour of Studio One and the control room for a rare behind-the-scenes stream of where the recording sessions for the Tomb Raider suite happened.

We welcome you to feel part of the team and to join us for a coffee and a chat. We are truly honoured to have Abbey Road’s permission to do this, so don’t miss out and take part in our journey, as we head towards the UK Album Launch Party at Hatfield House on Saturday 28th April and the album’s official release on 1st May!" - Nathan McCree

The Tomb Raider Suite album launches May 1st, 2018. Watch the live-stream video after the jump below!