New music for Lara Croft and the Temple of Osiris 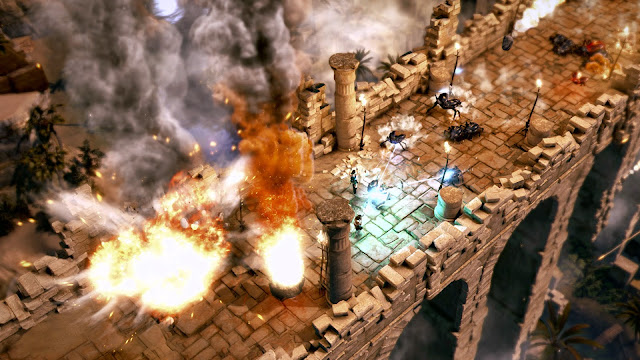 A Twitch livestream of a Lara Croft and the Temple of Osiris live demo and interview, presented by Square Enix at E3 2014 today, featured entirely new Egyptian-style tunes. Temple of Osiris is the sequel to 2010's Lara Croft and the Guardian of Light - the music of which was instead entirely recycled from previous franchise entries Tomb Raider: Legend, Anniversary & Underworld (Folmann/O'Malley).

It is uncertain if Jason Graves is responsible for the downloadable game's music as well as Rise of the Tomb Raider. The other possibilities are that a returning (Troels Folmann?) or entirely new composer is involved, or the new material is by someone in-house such as Alex Wilmer. The music accompanying yesterday's trailer is likely a taste of what's to come, with more to listen out for in today's live demo:

Update: IGN's July 22nd couch co-op feature not only dates Temple of Osiris for a December 9th release, but also showcases riveting new music. While the majority of the score sounds fresh, one recycled Underworld cue can be heard at the end of the first video.

We won't find out if all of the game's music is new until release, but The Last Revelation & Tomb Raider: Anniversary boast plenty of Egyptian themes fit for recycling. In other news that's music to our ears, actress Keeley Hawes will be reprising her (voice) role as Lara Croft in the title:

Thrilled to announce @Misskeeleyhawes is Lara in Lara Croft and the Temple of Osiris. Directing Miss Hawes reminds me why I love my job.

Topics: Lara Croft and the Temple of Osiris
Email ThisBlogThis!Share to TwitterShare to FacebookShare to Pinterest