[Originally Posted 9th July 2013:]
Update: Graves has added 10 more tracks to the Tomb Raider: Additional Music collection on SoundCloud, a total of 77 pieces now spanning over 3 hours. This release includes musical rarities from the "Vertical Slice" of Tomb Raider - a point where the game's stylistic progress was solidified in-studio - some of which were included in the Final Hours of Tomb Raider.

15 new minutes of Tomb Raider music from "Suite 01" posted on my SoundCloud page. Suites 2 and 3 coming up next! http://t.co/1RlEtw44XR

By request, posted all the music from the first Tomb Raider Vertical Slice - 13 minutes total, all unused. http://t.co/y5zC5Wl7LP

[Originally Posted 22nd June 2013:]
Update: As an unprecedented gift to fans, composer Jason Graves today publishes the entire Tomb Raider (2013) cinematic score; 36 tracks spanning 53 minutes of the game's structured cut-scenes. Several cues are unused in the final product, including the soundtrack to the original, unreleased ending of Tomb Raider, "Killing Sam". The tracks have been added to the Tomb Raider - Additional Music collection via Graves' official SoundCloud, now totalling 67 tracks at two and a half hours.


[Originally Posted 13th May 2013:]
Update: The Tomb Raider (2013) composer has added a further five tracks to his Additional Music collection on SoundCloud. The five cues represent the same World War 2 Base SOS Tower climbing sequence. One track is the final version that appears in-game, while the other four variations were unused. Graves mentioned three of them in his Tomb Raider: Original Soundtrack commentary; the corresponding track is a segment within "A Call Help":

"I composed three different versions for this gameplay. The first was very tentative and eerie, the second much more confident and assertive and the third a happy medium between the two. This is a major milestone in the game and we wanted to get the tone just right. In the end, various pieces from each version were cut together... slowly building with Lara's climb and gaining confidence with her ascent." - Jason Graves

The content now consists of 31 tracks totalling an hour and 42 minutes. Be sure to thank the composer for this unprecedented fan treatment via Twitter!

Here's another 45 minutes of additional music from the @tombraider score. Plenty more left to post in the future! fb.me/1Dr6Ah0sp

[Originally Posted 5 March 2013:]
Update: The composer has updated the set with the end "Credits" suite from the game, now totalling 38:53 across 8 tracks:

Update: Exclusive tracks Hunted & Scaling the Mountainside have been added to the set, which now includes 7 additional tracks from Tomb Raider at a total running time of 27:50!


[Originally Posted 4 March 2013:]
Update: The composer has updated the set with a whopping 8 and a half minute Tomb Raider Overture:

"This is the first piece composed for Tomb Raider back in early 2011. I used it to illustrate how Lara's story could be told through music. This piece was the guide for the entire score - Crystal Dynamics used it as temp tracks and I often went back and listened when starting a new section of the game." - Jason Graves

The album has been renamed as "Tomb Raider - Additional Music" to reflect this content addition, with the new description: "Tracks I composed that didn't make it in the final game, weren't released on the final soundtrack or were used in the trailers..." 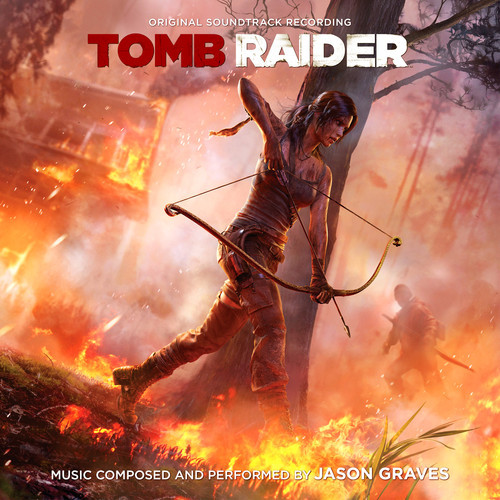 Today BAFTA-winning composer for the upcoming Tomb Raider reboot, Jason Graves, published a "Tomb Raider Trailers" album via his SoundCloud page. The package consists of all the music he wrote for the specifically scored advertisements thus far.

Tomb Raider Trailers includes the "Turning Point" CGI trailer score in it's entirety, entitled Alone (2010), as well as soundtracks to the "Crossroads" (2011) and "Survivor" (2012) trailers and the "Survival Guide" featurette. It should be noted that the majority of Crossroads composed by Graves was not actually used in the final corresponding trailer; licensed trailer score was opted for instead.