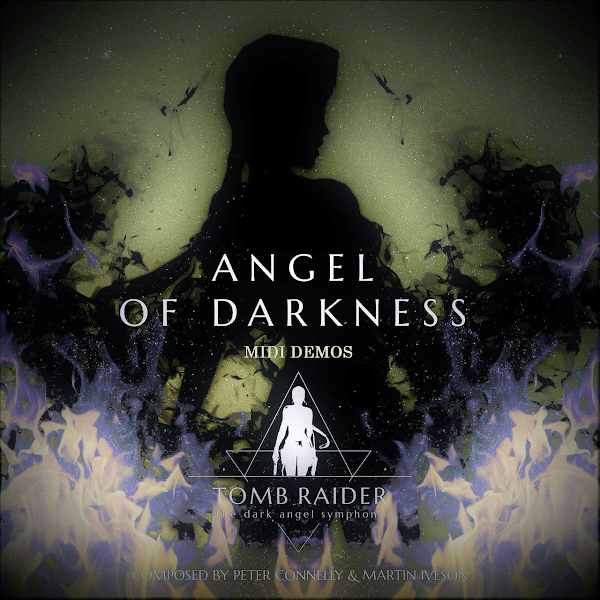 The Tomb Raider: The Angel of Darkness MIDI Demos is released by composer Peter Connelly today, being the fifth (5th!) album within the Dark Angel Symphony project. MIDI Demos contains an eclectic mix of musical instrument digital interface versions of previously released material, demos for ultimately unused cues, plus previously unreleased electronic in-game score. The collection is also hot off the heels of the Tomb Raider Suite: Synth Mixes, published by Nathan McCree last month, which instead aimed to embody the Playstation-era timbre with authentic sound reciprocation of the original titles.

While the Synth Mixes approach doesn't exactly apply here, at first glance, the MIDI Demos may not strictly entail exact soundtrack material from the franchise's sixth entry. Perhaps this is for good reason, as this is advertised as an album of demos. But, most importantly, this rare collection does indeed contain unprecedented representations of material from particular stages of Tomb Raider: The Angel of Darkness (2003). Levels such as Le Serpent Rouge ("Le Serpent Rouge"), Storm Drains/Louvre Galleries ("Sewage Pollutant") & Strahov Fortress ("Prague Metropolis") were accompanied by electronically mixed tracks in-game. Both the pity and consolation here is that the applicable final-use cues incorporated the real-instrumentation of the Abbey Road Studios recordings, however, these "demos" are nearly indistinguishable (albeit the infamous "Le Serpent Rouge" bass doesn't quite 'slap' the same in its extended form). The electronic/orchestral mixes were strangely and entirely omitted from Tomb Raider: Angel of Darkness Remastered (2019), and the MIDI Demos release begs the question - have they actually now seen the light of day?