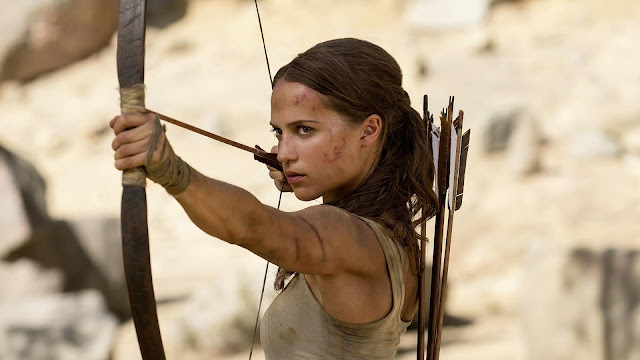 New: Alicia Vikander in Tomb Raider (2018) via Empire
It was revealed in June that composer Tom Holkenborg aka Junkie XL was helming the score to the upcoming Tomb Raider film reboot starring Alicia Vikander as Lara Croft, due out March 16th, 2018. The film is heavily inspired by the 2013 video game reboot of the same name, and with filming wrapping up in Cape Town and London earlier this year, the visual tie-in is unmistakable. The question now on the tip of every Tomb Raider fan's tongue - will the film soundtrack utilise the thematic motif from the games?

Circumstantially it appears that Jason Graves, the composer tasked with crafting a new Tomb Raider theme for the rebooted game series in 2013, has already asked Holkenborg the very question via Twitter:

Really? Nice! Can you do your own main theme or are they asking you to use mine? Can't wait to hear!

Holkenborg may not yet be able to disclose plans for the music of Tomb Raider (2018). A trailer for the upcoming film by director Roar Uthaug is surely imminent, but as goes the film advertising industry, it's unlikely to incorporate any work from Holkenborg and instead be accompanied by third party trailer score.
Topics: Jason Graves, Tom Holkenborg/Junkie XL, Tomb Raider (2018)
Email ThisBlogThis!Share to TwitterShare to FacebookShare to Pinterest