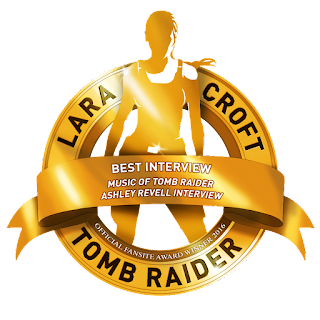 As part of the Official Fansite Program, Music of Tomb Raider has had the privilege of conducting interviews with important figures in the Tomb Raider music sphere since establishment in 2011. Last year we had a hap-hazard encounter with Ashley Revell, music editor on Lara Croft: Tomb Raider (2001) and brother to composer Graeme Revell, crossing paths at Auckland International Airport.

The community voted and awarded fellow fan site Tomb Raider Source for their interview with Nicobass : Remake de Tomb Raider II, while developer Crystal Dynamics hand-picked MoTR's article for the same award of Best Interview: "an exceptional interview conducted by a member of the Official Fansite Program focused on the Tomb Raider franchise which required extensive research and critical thinking to achieve."


"An interesting and exclusive interview with Ashley Revell – the music editor on Lara’ Croft’s first Hollywood outing – and brother to composer Graeme Revell. Music of Tomb Raider caught up with Ashely in person in Auckland, and the in-depth nature of the interview is sure to appeal to fellow music and cinema fans." - Crystal Dynamics

Thank you to Crystal Dynamics, the community and our readers. The full interview can be read here.
Topics: [Fan Tributes]
Email ThisBlogThis!Share to TwitterShare to FacebookShare to Pinterest