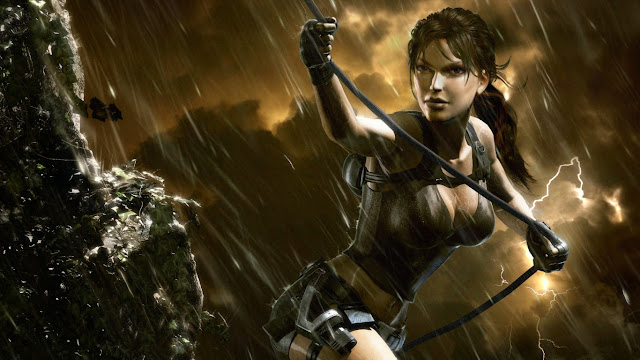 During all the pre-media hype surrounding Underworld, Folmann has been interviewed by Crystal Dynamic's Community Manager, Keir Edmonds, during the third pod-cast for the title. It's quite a long one, so please take a read after the jump:


Keir Edmonds: Troels is here to talk us through the new Tomb Raider: Underworld theme, which he's composed... and I've got a few questions here from the forums as well and some questions from that I've composed myself. So without further a due, the first question is from 'Cosmos' - they thought the scores from Legend & Anniversary were brilliant and want to know if you'll be returning as the composer for Underworld.

Troels Folmann: I'm returning as the "Main Theme" composer from Underworld and I'm also doing music supervision, but I have the great pleasure of collaborating with another composer, Colin O'Malley, who's doing the bulk of the in-game and cinematic scores. So my main job in this regard is mainly to flesh out the main themes and particularly the core main theme and then supervise the music production as a whole.

KE: In terms of the supervision, what kind of role did you take when you were directing or helping him?

TF: I think we've learned a lot of lessons on both Legend and Anniversary, I think for me there were some thematic discussions. We never really utilised the main theme in the context I'd have liked to and I think it's always an issue when you're composing - you're sort of supervising yourself - which I did on Anniversary and Legend. This time around we wanted to change it a bit so we actually had a music supervisor and I'm also doing music production on the side, so we felt it was a good idea for me to supervise audio while doing my daily production tasks. I've been working in a kind of external capacity dealing with the composer, trying to explain the vision of the game and trying to funnel a lot of thoughts from our creative director, Eric Lindstrom, and see how I could support his vision musically. So it's been more of a thoughtful process whereas on the previous games it was just me doing my thing - this time round we actually have time to investigate and analyse all the different aspects of music that we wanted.

KE: Where did you get your inspiration from when you were composing the music?

TF: I've been asked this question a few times and my answer tends to be different every time; so I think I'm constantly changing my path for inspiration. Normally I don't feel anything, I don't hear anything or see anything, but that was before I got conscious of the fact that I'm connected to the spirit world. My best answer to you is that I get my inspiration from spirits. I figured that out because I normally compose between eleven to three in the night (which is my prime time) and I've started hearing voices in my head. I'm sure everybody's going to call me absolutely crazy, but I'm actually hearing voices of ghosts or spirits talking to me. I'm sure there's a logical or psychological explanation for this but that's the best reason I can give you.

KE: Wow. How long does it take you to compose all the music for a game? I guess for Legend; how long, in terms of composing time, did it take?

TS: Legend was the longest score I've ever worked on. It took me about 9 months to do 4 and a half hours of music; some of it went into the game, some of it didn't... Anniversary took roughly 5 months and this project [Underworld]'s been taking roughly 9 or 10 months because we've been dealing with the external composer, and we've been very very focused on getting the main theme that everyone felt comfortable with - a new main theme. So that's been taking quite a while as well. We did 22 revisions on the main theme before we felt we had something we could work with.

KE: What was the overall tone and atmosphere you were looking to deliver with the soundtrack for Underworld and the main theme?

TS: There's been different visions. For the in-game stuff it was important to learn the lessons from Anniversary and Legend. We really wanted to have a more ambient, subdued kind of score - I think I went totally over the hill with Legend and Anniversary, which was partially serving the purpose of those games - but this time round we wanted to have a more subdued, emotional type of score. We also wanted some stronger thematic aspects which I think we didn't have so much in the previous games, so we paid particular attention to the main theme to create something that was super catchy, that you could remember once you've heard it a few times. It took a long time to figure out what that was supposed to be. We also wanted the main theme in particular to be a journey; you'll hear that it's utilising the old Tomb Raider theme in the beginning and the end, and then it's utilising the new theme in the middle. The new theme is essentially just 5 notes but repeated over and over through modulation (which is changing of chords and melodic structures). We wanted the piece to have a underworld tone yet to be a journey, because this game for sure is going to be a journey like we've never experienced before in a Tomb Raider context.

KE: 'Sam Reeves' asks, will the music be more orchestral or contemporary throughout the game?

TS: Yeah! Absolutely; it's one of the lessons that we really learned on Anniversary. A lot of the great feedback we got from the forums, through play testing and revenues was that people really enjoyed orchestral scores. So this one is purely orchestral; no beats and no rhythmic elements like Legend.

KE: 'The Tomb Raider' asks will the music be playing during levels? So I guess; will there be a constant soundtrack or will it be connected events?

TS: One of the great advantages of being a supervisor and the capacity that I have is that I could pay more attention to detail; in terms of how we were using music fragments in the game. I am sure that some people are aware that we invented the methodology called Micro-scoring, which is essentially about breaking a score down to it's tiniest components. In this game I think we've taken that to a new level - you have many more small scores which are not loop-able (which means that they only play one time) and are triggered upon specific events. I think people will see that there's going to be more fragmented type of music that plays all over the game which is not going to be the constant type of music that was in Legend, for example. So it's probably in the direction of Anniversary, but with even more musical fragments to complement the play experience.

KE: How closely do you follow the development of the game when you're producing the music?

TS: We follow it very closely - every day with the audio group we actually play the game, we discuss it as a group and we discuss how we can improve the environment, music instrumentation, what kind of of music would work in this environment and do we really need music? I think a good lesson for all of us is that silence is actually the 7th component in terms of scoring a Tomb Raider game as well. So we've been, in particular, paying attention to silence and what silence can mean in a game - it doesn't mean it's totally silent, it just means we really want to tone things down and build more anticipation. Legend was a good counter-product where it was just all loud throughout the whole game; we didn't feel we were utilising silence in the right capacity.

TS: I'm very very slow as a person and it takes me many years to acknowledge something; I couldn't listen to the Legend score for years - it's only now that I've started appreciating it. If I had to make a future projection the best score's probably the main theme for the new game [Underworld], though I don't like it right now because I've just spent a month with it. But I think that would probably be the one. I know it's been more of an emotional journey for me to create that piece, so let's see.

TS: I think it's extremely challenging that there is such a diversity in the environments that you need to score for each of the different sections of the world (wherever the game takes place), so you need a composer who's somehow versatile in scoring in different ways; where there's different types of orchestration, melodic content, usage of ethnic instruments and so forth (which we're using in this game as well). I think that's difficult, but it's also the fun part of it because it allows you to spread out your pallet as a composer and compose in a more versatile way, compared to doing a shooter where it's all going to be action based.

KE: What's the one favourite thing for you for producing the music for Lara and for Tomb Raider?

TS: I think it's an amazing opportunity to express the game in a new way. When I say "express", I mean it's amazing to see when you have the the game without any audio on it and how audio breathes life into the game. There's that breath of life that really makes the game come alive, just with sound. Then when you add music there's a whole emotional dimension going through the game, and I love when we put music in there and we see how it comes alive. A good example for people to test this out is if you are watching a commercial and you shut down the audio on your television - the commercial totally looses purpose. It's kind of the same thing with a game. When we put audio in the game, and music in particular, I think we see new layers of emotion happening - which is a great joy.

TS: Only pay sympathy that it's been quite a journey for me to compose the piece, that's the only thing that I have to say. I don't really know why this main theme has been such a struggle for me; this is still something I'm wondering about on an artistic level, but the piece is supposed to be a journey and it's been a journey for me as well, so maybe that can provide context to the painful effort of making it.

KE: Brilliant! Well, on behalf of all the Tomb Raider fans, thanks very much for producing it as I think it's absolutely fantastic. Thanks very much Troels, and I look forward to hearing the rest of the game.

Update: As well being a teaser provided at the time of this interview, Folmann's "Main Theme" was later released under enclosure in the Tomb Raider: Underworld [Limited Edition] bonus DVD soundtrack: