The Tomb Raider Suite set to record album this October 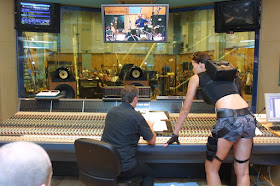 Lara's been to Abbey Road before - for "Angel of Darkness" in 2002
Original Tomb Raider legacy composer Nathan McCree's more-than-successsful Kickstarter campaign, funding the live recording of his music to Tomb Raider (1996), Tomb Raider II (1997) & Tomb Raider III: Adventures of Lara Croft (1998), is set to kick off this October. The Tomb Raider Suite album will result.

The Royal Philharmonic Orchestra, conducted by Robert Ziegler, will be performing McCree's work as orchestrated by Adam Langston. Recording at the world famous Abbey Road Studios is booked across five sessions for Monday & Tuesday, October 16th & 17th, 2017. The release date of The Tomb Raider Suite was slated for November 2017, but this could meet delays to allow mixing, mastering and manufacturing.

"At the moment the estimates are looking very promising. I can safely say that we will be increasing the size of the choir from 20 to 40 voices. This should have a dramatic effect on the final sound. We will also be booking a 5th recording session at Abbey Road which gives us more rehearsal time and the capacity to record more takes. This will have a significant impact on the final recording - quality being our main goal here." - Nathan McCree